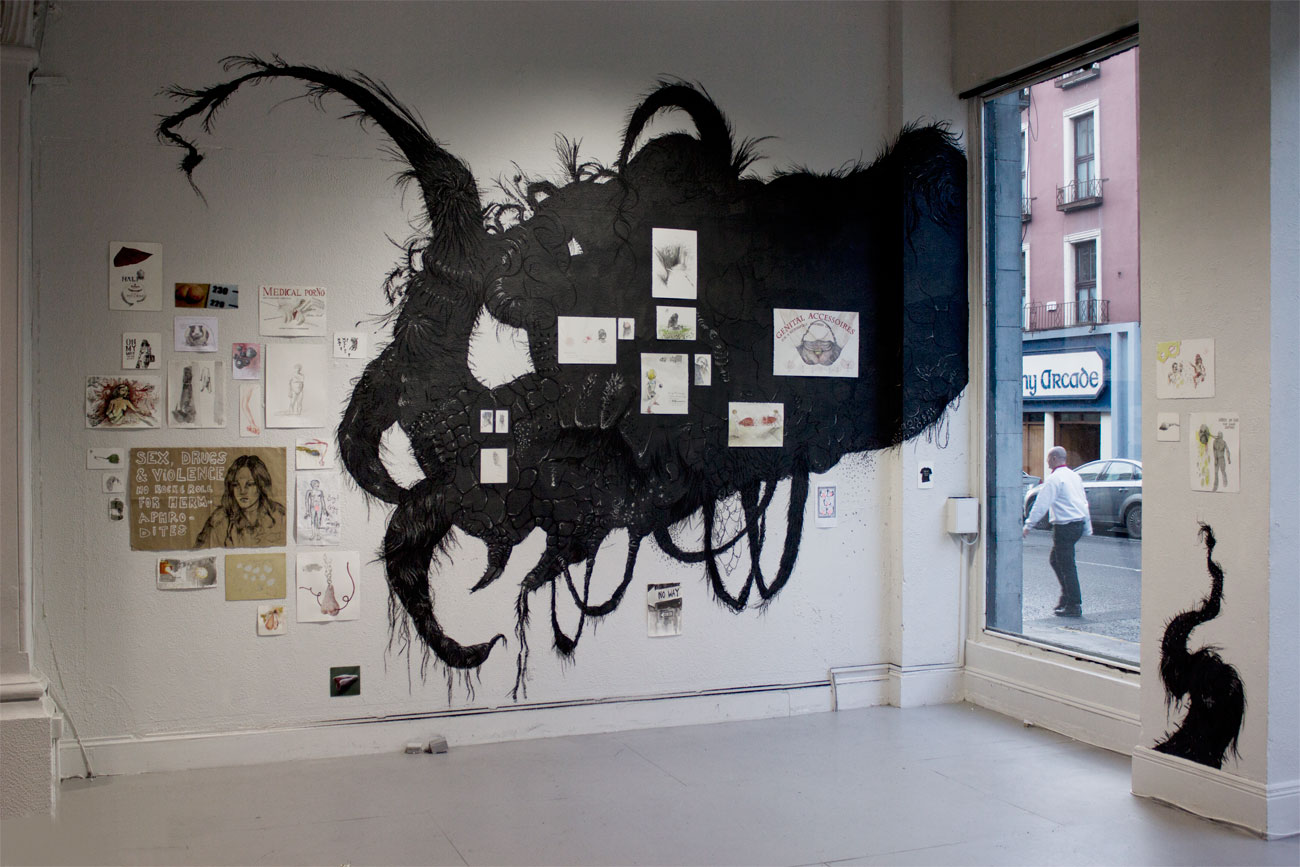 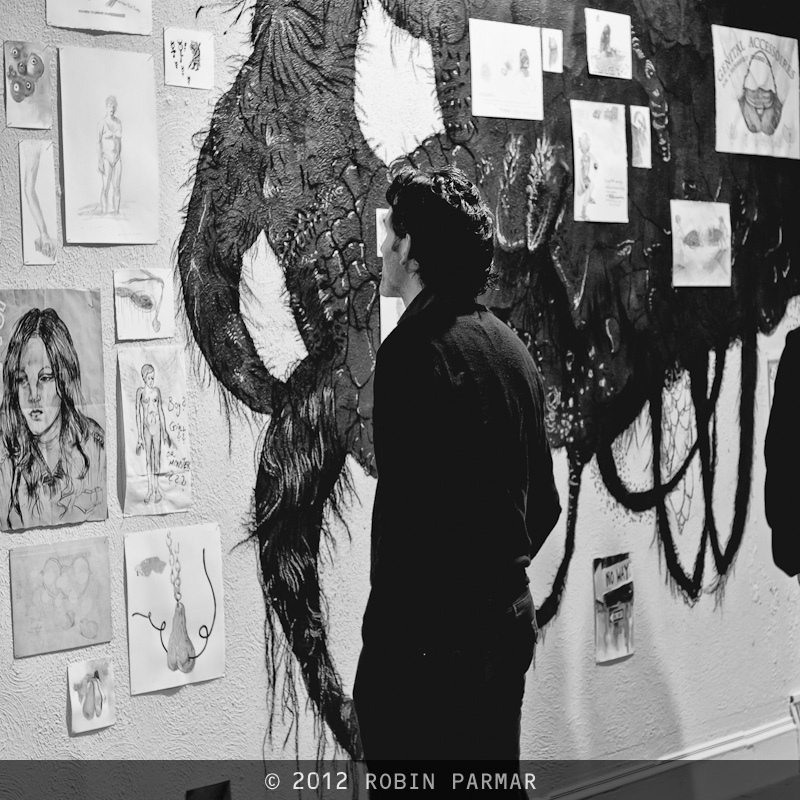 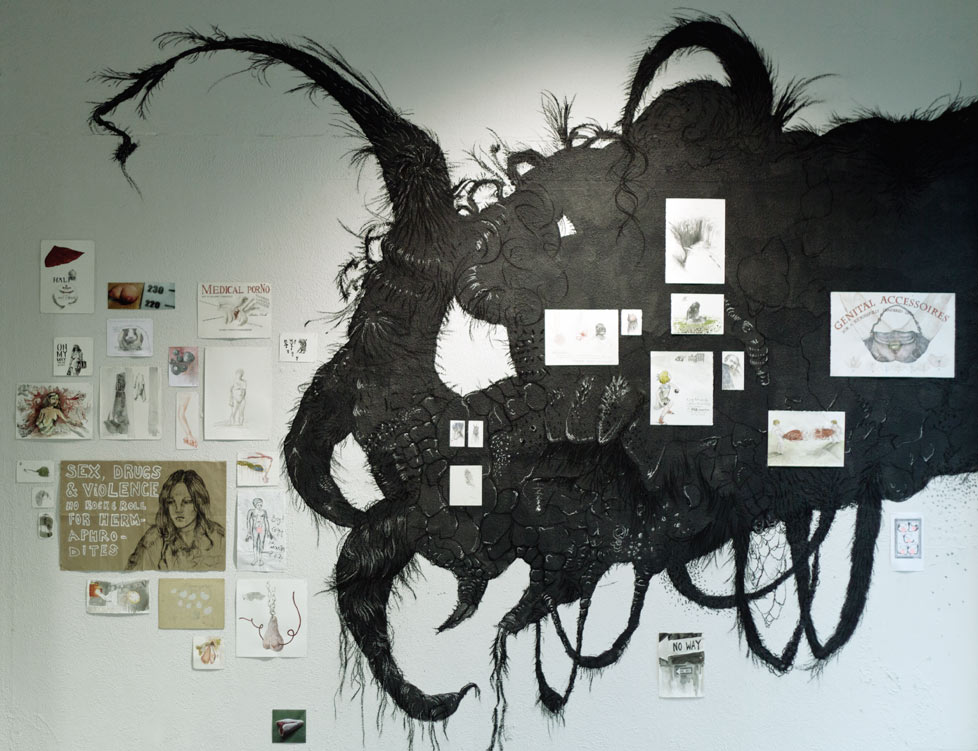 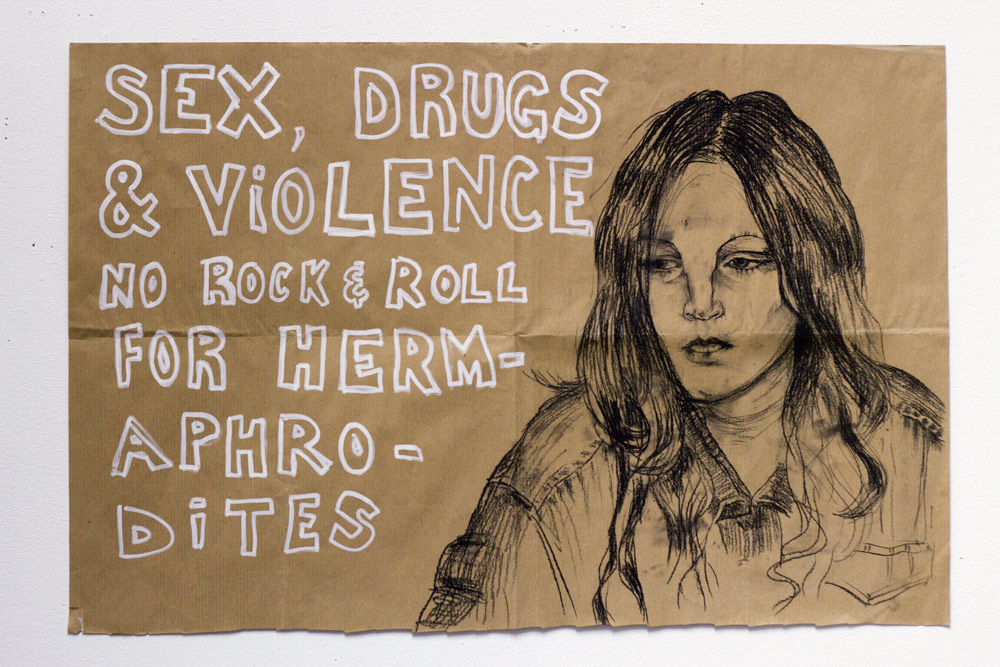 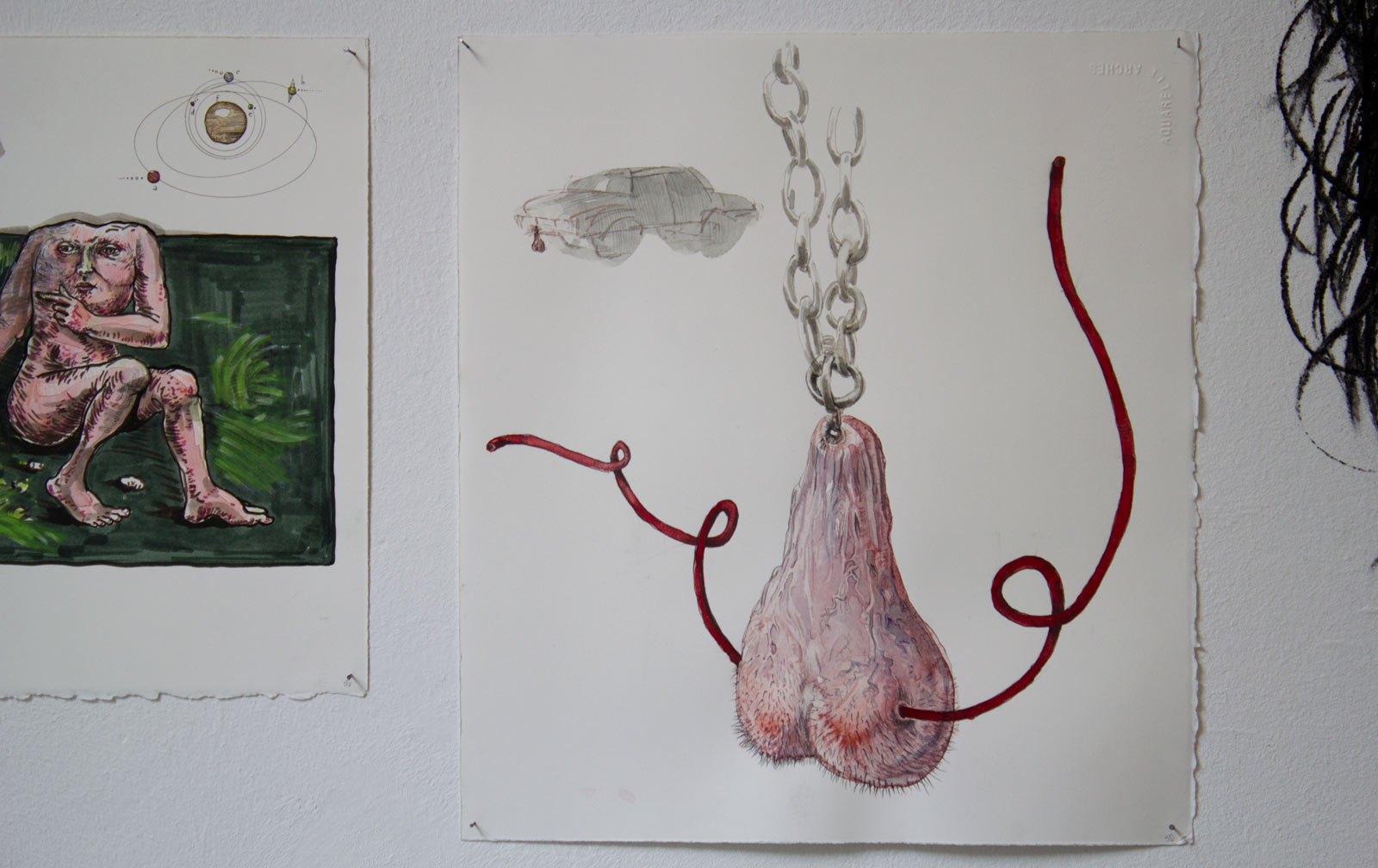 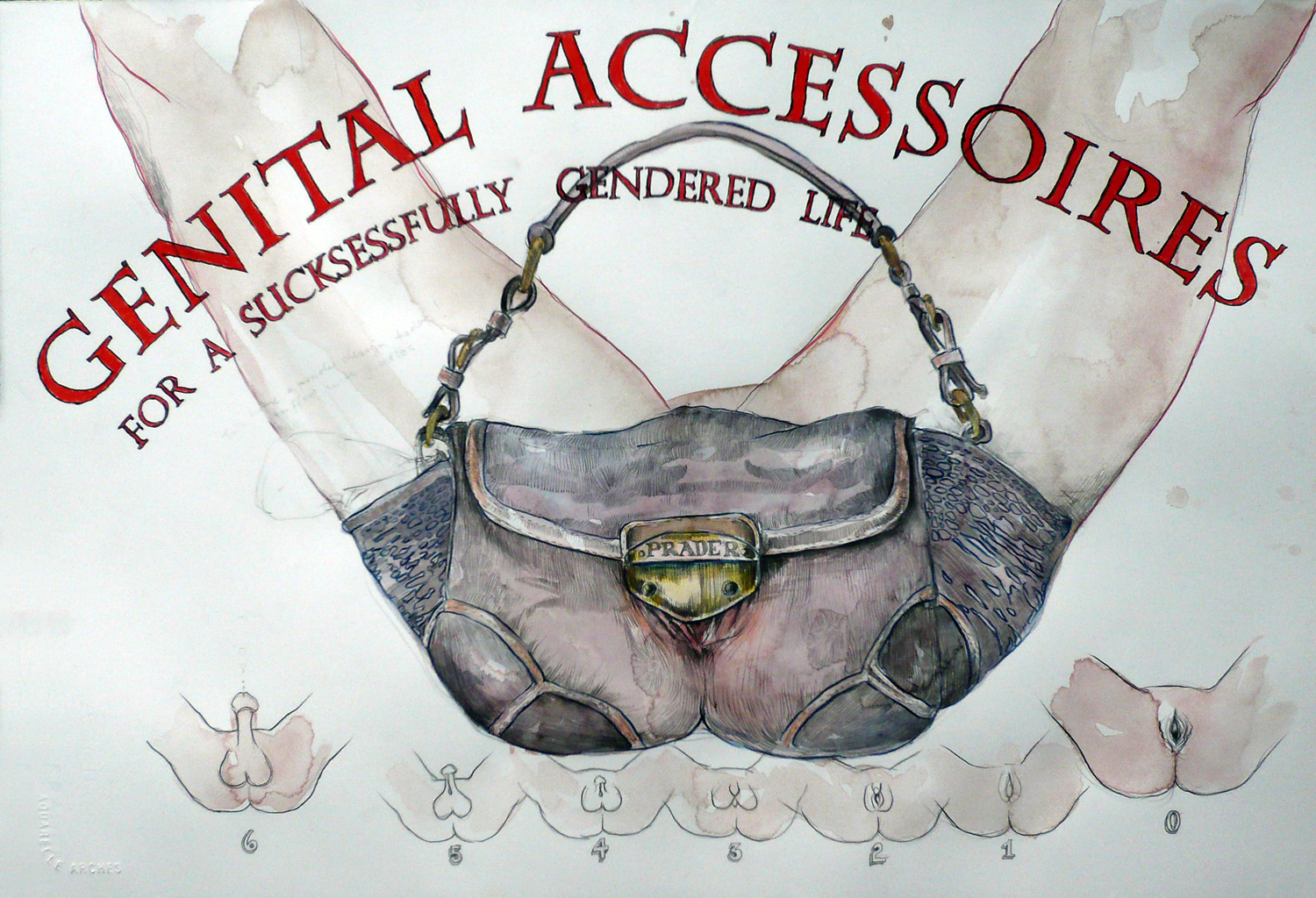 Other Drawings is an exhibition of artworks by five artists who have made drawing a central part of their artistic practice. All engage in creating poetic expressions of otherness, which query definitions of sexuality, subvert normative ideals and explore attributes of liminal personae. The medium of drawing is realized with both modesty and ambition, from the small, precise and intimate sketch, to drawing as installation that interacts with the gallery space and drawing as performative spectacle.

About the artists’ work:


The central core of George Bolster’s practice is an examination of belief systems. His scepticism about these systems, political or religious is contrasted by a fascination with the idea of belief. Religious Art has been popular culture and propaganda. Bolster examines the representation of this subject, deconstructing the accepted narrative/conventions presented with the introduction of contemporary elements eg. hi-fi headphones, logos and gothic tattoos. Through the quotation of pop music and street culture, his work engages a wide range of ideas, such as: the equation of belief with contemporary culture; the re-contextualisation of religious figures; and the curiosity, bewilderment and even envy that accompany an aporetic experience of religion. He is interested in the exploration and invention of contemporary allegory and views look at religious buildings as the first sites of fusion of the arts.
www.georgebolster.net

Jenny Keane’s practice is focused on the word ‘horrific’. Visually, her work deals with society’s fascination with horror films – rather than being a fan, Keane’s interest in horror stems from the negative representation of the monstrous female body, and the subversion of these depictions. Through video installation and performative drawings, the work explores the self-portrait in an attempt to investigate the dichotomy between fear and desire, its relationship to language and connection to the (female) body. The work focuses on concepts of abjection and liminality alongside the idea of compulsive repetition, a pause or loop that subverts the constructions of narrative.
www.jenny-keane.com

The topics in Ins A Kromminga’s work stem from his_her personal experiences as an intersex person. Both the history of otherness and political activism inform his_her practice. Mutants, Monsters, Freaks and Misfits are incorporating the fears of a norm-constrained culture and represent the boundaries of the acceptable – reflecting the face of the regulators who made them. The expansive visual and conceptual material of transgression becomes part of his_her vocabulary and meets the agendas and ideas of social and queer politics and human rights issues. The interconnection of scale variations of the small sized works and their clustering within the wall filling drawing respond to his_her expectation of reading apparently personal or private issues within a social context and thus to always understand them as politically relevant.
www.abject.de

Breda Lynch references gothic worlds in her work, which question ‘what is considered traditional ‘normality’. This is in a sense a night or ‘noir’ world where extremes and uncertainties of sexuality, morality and power exist shadowing the prevalent social ethos. The gothic operates within what Freud terms the ‘uncanny’, which could be described as the fear of the new and unknown. But the gothic world is a dark one, where it is impossible to see certainties. The fact that there are no certainties is much more unsettling than any supernatural imagery that the gothic evokes.’ (Greg McCartney – Director, North West Visual Arts Archive, Ireland, 2007).

Kieran Moore’s main sources of inspiration are to be found in the late 1960s and early 1970s: the camp of Glam rock, the suburban paganism of self-styled ‘King of the Witches’ Alex Sanders, the far out mélange of gender confusion and Aquarian age excess of Russ Meyer’s ‘Beyond the Valley of the Dolls’, The Society for the Prevention of Cruelty to Long-Haired Men, the unkempt pulchritude of ‘Jaybird’ magazine and the writings of H P Lovecraft. (…) Kieran’s own gods straddle the margins of medieval folklore and a transgressive dress sense part inspired by the sleeve of David Bowie’s The Man Who Sold the World (1970). There is a sense of something being awry, not quite right, not quite covered and where it is not quite covered surprises the viewer that it is either a pre-adolescent male or a shaved adult of feminine features.
www.thecompleatemoore.com